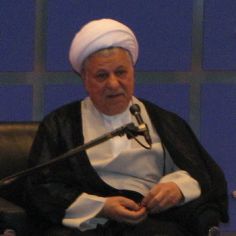 Slideshow with photos and bios

RAFSANJANI BREAKS SILENCE SUNDAY JUNE 28 2009
Head of Assemby of Experts regarding recent developments after the election and a mysterious and complex factors that create separation between the people with the goal to deprive individual citizens of trust in the Islamic system.
STAYING CENTRED
We hope they can resolve matter carefully and with respect to fairness and justice and legal cooperation with the candidates to end protests.
Rafsanjani's relatives are frequently arrested, and Rafsanjani himself today received a subtle threat from Khamenei "the elite is advised to exercise caution with words and actions"

Cleverly, the mysterious agents could also be interpreted as a hint to extrem right plotters behind the rigged election.

SUPPORTING SEA OF GREEN
"Wherever the people entered the scene with full alertness such plots were foiled," he was quoted by the ISNA and IRNA news agencies.
ASKING FOR ELECTION PROBE

"This valuable move by the Supreme Leader in order to attract the people's trust towards the election process was very effective," Rafsanjani said during a meeting with families of victims of a 1981 bombing in the Iranian capital, which killed many officials.

"I hope those who are involved in this issue thoroughly and fairly review and study the legal complaints," he added.