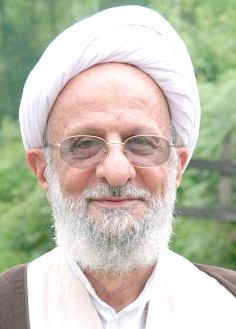 Ayatollah Mohammad Taghi Mesbah Yazdi (born 31 January 1934 in Yazd) is a hardline Iranian Twelver Shi'i cleric and politician who is widely seen as Iranian President Mahmoud Ahmadinejad's spiritual advisor. He is also a member of Iran's Assembly of Experts, the body responsible for choosing the Supreme Leader

Yazdi is one powerful Ayatollah, by some considered the most influential of the clerics in the holy city of Quom. He is suspected of being behind two assasination attempts on Khatami, one when Khatami was president and one later in Khatami's political career.
Yazdi is extremely conservative and isolationist, arguing in favour of total isolation of Iran from the West. He is also the spiritual advisor of Mahmoud Ahmadinejad.