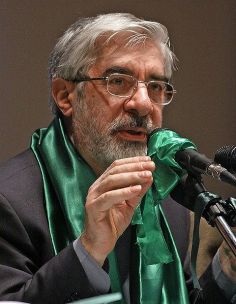 Mir-Hossein Mousavi Khameneh (born 29 September 1941) is an Iranian reformist politician, painter and architect who served as the fifth and last Prime Minister of the Islamic Republic of Iran from 1981 to 1989. Mousavi is currently the president of the Iranian Academy of Arts and was a candidate for the 2009 presidential election.
Who is Mir Hossein Mousavi?
On May 22 students protested against Mousavi, asking him about his role in the 1988 massacre.

Mir-Hossein Mousavi is considered "an unlikely leader of the protest movement". As prime minister of Iran from 1981 to 1989 he presided over a cultural revolution in which Iranian universities were violently purged of influences other than Islam.

Many scientists fled the country to avoid death or imprisonment. But Mousavi, although a conservative, is now part of a broad coalition of political and ethnic forces - ethnic Iranians make up just half of the population of Iran - who want greater democracy and openness to the world.
The protesters in Iran and many leading clerics now look to the presidential election challenger, Mir-Hossein Mousavi, to unite the country, which has been divided by strong indications of electoral fraud and violent clamp-down on peaceful protesters.
JULY 1 2009 STATEMENT
Mir Hossein Mousavi has released statement to Iranians on July 1 2009 in which he offers reconciliation and no retribution for crimes committed against the nation and the citizens during the more than two weeks of violent silencing of the opposition:
Several characters and groups have come to me and asked me to forgive what happened in the past. Perhaps they do not realize that I let go off my own personal rights from the beginning. But the issue of the elections was not and is not a personal matter. I cannot let go of or compromise people’s rights which have been violated. The issue is our regime’s republicanism and even its Islamic character. If we do not stand up, there will be no guarantee that what happened in recent elections will not happen in the future.
Mir Hossein Mousavi also announces a special team to re-establish the fundamental principles of the Islamic Republic of Iran:
A group of elite are going to come together and create a legal organization to safeguard the dishonored rights and votes of the people by publishing the documents and proofs of fraud and referring to judicial courts. They will regularly announce the results to the people. I will also join this group. This group will demand the enforcement of the constitutional articles that have been violated and in addition, it will pursue the following:

* Observance of article 27 of the constitution regarding freedom of assembly

* Freedom of the media

* Ban illegal government intervention in communication channels such as Internet, text messaging, and prevent the disconnection of phones and eavesdropping on people’s conversations

* Have independent TV channels inside and outside the country

* Release of all political prisoners, annulment of all forged security cases