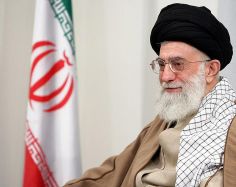 Khamenei has been Supreme Leader of Iran since 1989 and was president of Iran from 1981 to 1989. He has been described as one of only three people having "important influences" on the Islamic Republic of Iran, the other two being Ayatollah Ruhollah Khomeini, leader of the revolution, and Ayatollah Akbar Hashemi Rafsanjani, president of Iran for much of the 1990s.

"The Shah's sin was to insist that whatever he says is right, not whatever the people say", Ayatollah Khamenei once said. That was in the past. Today the "Supreme Leader" of Iran is considered a "new Shah", an oppressor, and the nightly calls - Mar Bar Dictator (Death To The Dictator) - are directed at him, not Mahmoud Ahmadinejad.

Ayatollah Khamenei is the de facto ruler of Iran, but he is supposed to stay neutral with regard to presidential elections, according to the fundamental principles of The Islamic Republic of Iran.

In the 2009 election Khamenei baffled his people by openly siding with Mahmoud Ahmadinejad.

After the first week of protests Khamenei banned public demonstrations without a permit, but protesters - led by Mir Hossein Mousavi - took to the street. Police and Basiji disrupted the demonstrations, which ended in bloodshed.

Khamenei is seen as operating on behalf of senior officers in the powerfu Iranian Revolutionary Guard Corps, trying to establish an emirate and overthrow The Islamic Republic of Iran.

His political opponents, namely Khatami, has accused him of staging the election as a coup.

Behind the curtains the powerful rival, Hashemi Rafsanjani, is perceived to work to curb, check or undermine the absolute power of the "Supreme Leader".

Ali Khamenei, on July 1, announced that Western governments perceived as enemies to Iran included Iraq and Afghanistan. Mahmoud Ahmadinejad two days ago threatened the West that Iran would work to "break the global monopoly of power".