"Once the anger bubbles over and the people take to the streets again, all it needs is for a hardline cleric to give a fatwa for jihad against Mir Hossein Mousavi's supporters and the country will descend into blood and chaos. Khamenei needs to do something, and fast."

An informal, youthful paramilitary police called the Basij have carried much of the brunt of the effort to suppress demonstrators. The Basij are controlled by the Iranian Republican Guard and are under the authority and control of Supreme Leader Ayatollah Khamenei—with personal loyalty to Khamenei a principal criterion for recruitment of members. 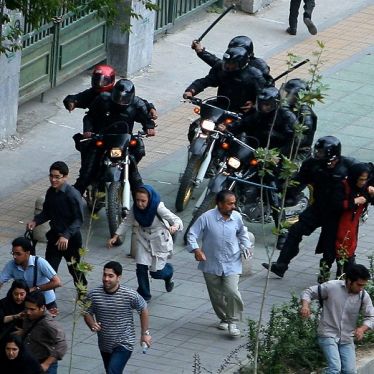 The Basij force has been estimated at at least 100,000 strong. They have been acting as the brutal hand of Grand Ayatollah Khamenei in the recent uprising, beating, maiming and killing protesters with impunity, often also launching themselves at will at any civilian suspected of supporting the uprising.

In many photos and video documents you will see them ride bikes, some wielding guns, but most equipped with batons.

Numerous cases have documented they do not discriminate when comes to age, gender, and beatings involve children, women and elderly.


A project to Expose Basiji has been established as counter-action to their violence and, possibly, to the attempts of Iranian government to crowdsource identification of protesters on Press TV and a variety of websites.

Photos identifying basiji are being distributed around the internet in an effort to warn Iranians.

Basiji are largely responsible for instigation of violence at peaceful protests, attacking an assaulting Iranians, also in cases unrelated to demonstrations.

Destruction of property by Iranian police has been documented by YouTube videos. The fury of Basiji, often working alongside police, and ruthless methods of assault is one of the most well-documented facts from the two weeks of intense protesting in Iran.

Reports indicate average Basiji are paid $200 per day for their services to IRGC, and foreigners even more.

The foreigners are thought to be Arabs brought in by Ahmadinejad, Khamenei and the Revolutionary Guard to quench protests, possibly from the Lebanese divisions of Hezbullah - an organization with its own independent factions in Iran.

June 26, 2009: Iranian Mininstry of Intelligence informs that two persons who assaulted a Basiji are identified and arrested.