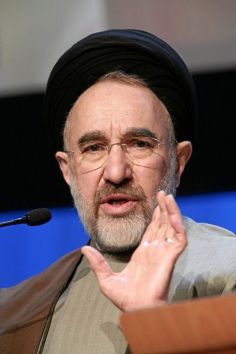 Mohammad Khatami is a very popular Islamic scholar who has been active in Iranian politics for decades. He is outspoken and known for his liberal and reformist views. He supports Mousavi in the current post-election debacle.

Strategy plan for the Iranian people
KHAMENEI: IRANIAN ELECTION A COUP
The following speeches are translated from this article on Khatami's website by a Farsi and English speaking member of Twitter. Some of the edits, however, are mine. I have added them from my understanding of English grammar and political language in Iran and in general.

I apologize for any errors and encourage anyone with more intimate knowledge of the text to add their corrections.

July 1 2009
VELVET REVOLUTION
Speaking to relatives of those recently arrested Seyed Mohammad Khatami said:
“If this venomous propaganda atmosphere continues, we have to say that the velvet revolution has happened against the republic and the people, who are a part of the establishment.

When the society's mindset is not content with the result of the election, the principal philosophy of election will be questioned, and the establishment will fail.

I am sorry to announce that the sole offence of you and your beloved [has perpetrated] is the fact that you stayed in Iran and endeavored to cater to people their incontestable rights.

What was the response of the regime to this grandiose public movement? Shedding the blood of people, militarizing the environment of [civil] society and accusing those who [seek for] the establishment to prosper.

They have severely restricted the communication facilities, the internet and the press, and in a completely closed and policed environment they surreptitiously arrest tens of people every day.

The so called national media, time and again, depicts certain scenes aiming to provoke the emotions of a particular part of the society.

Then they point finger at the people, asking why they referred to other sources for news and information.
Dozens are killed and hundreds are beaten and injured. Where is the state TV to portray all this?
Click here to comment
ACCOUNTABILITY
Khatami to Sharoodi (head of the judiciary wing):
What [we] witness today is adverse to every article of the regulation you, yourself, released under the name of citizen rights.

[It seems that now] everyone can arrest anybody he likes, and later interrogate them and without anyone being aware of the sort of treatment and pressures the [detainees] were subject to, they can be forced to confess and repent.

Those interested in Iran and [orderly society] are arrested in a blanket manner, and squashed by some who takes no responsibility for their actions.

And the legal and intelligence system of the establishment officially pretends to be unaware?

Everyone is talking about a calm atmosphere. How can anyone calm down with all these arrests or with this increasingly policed environment? So much for "national rapprochement"!

What are these unsubstantiated statements? What does color revolution/subversion mean?

It will calm down whenever the public trust is attained, when the public knows what happened to their votes, and when the murderers of innocent people are identified and prosecuted.
Click here to comment
Create your own website with mono.net